It’s hard to imagine that MTV’s reality series, Jersey Shore, can teach little more than the correct way to Jersey Turnpike, how to spot a ‘Guido’, or a snazzy new vocabulary.  However, with a little effort and an open mind, we’ve discovered three great lessons Jersey Shore can teach you about writing better essays.  So, the next time you start feeling guilty that you’re procrastinating writing that next essay, exhale a sigh of relief knowing that you’re actually subconsciously laying the foundation for an awesome essay.

This seems obvious, yet people continue to do it.  I’m often editing an essay and I’ll suddenly be tripped up by a word that is grossly out of place.  I’ll pause, reread the segment (giving the author the benefit of the doubt), get tripped up again, and then realize the word in question is being used in completely wrong context.  Too vague for you?  Here’s an example from Jersey Shore’s own Deena Cortese:

Yes, you heard that right… Deena meant to call Mike a pyromaniac.  Instead, she used the word hermaphrodite.  Hermaphrodite?  Really!??!  While I might believe Deena if she attempted to make a well thought out case for Mike possessing both male and female reproductive organs, this is clearly not what she was trying to say.

The Jersey Shore cast is notorious for using words out of context.  Learn from their mistakes and only write your essays with words you understand.  Trying too hard to sound smart will backfire more often than not, and you’ll leave your audience poking fun and laughing at you.  Worse yet, one misused word will make your reader question your intelligence and the entire validity of your essay.  Thesauruses can be great tools, but trying too hard to stretch your vocabulary limits will often result in less than desirable outcomes.  Don’t be like Deena!

Try to imagine, for a moment, an unedited episode of Jersey Shore.  While watching Ronnie and the boys pump iron or lie in a tanning bed may appeal to some of you ladies… it just wouldn’t make entertaining television.

While some of this editing is a no-brainer, it inevitably gets tough cutting down a full summer of filming into just twelve, one-hour long episodes.  Producers need to carefully craft these stories to make sure they are interesting, appealing, and tell the story they want to tell.  And you can bet that they aren’t doing this alone!  One person’s opinion as to what should and shouldn’t be aired to millions of viewers is not a wise move.

The same needs to apply to every essay you write.  The importance of editing an essay is huge!  Each paragraph, and even sentence, is vital and needs to be well crafted.  This gets even more important when there are word count maximums enforced (the equivalent of your one-hour time-slot).  So, whether you’re convincing your audience that Mike is the house villain or trying to convince your reader that Don Quixote isn’t really crazy, you need to make sure you’re telling the story you want to tell.

Having a friend edit your essay is a good first step.  However, you will get much more valuable help and feedback from a professional essay editor.  You can bet that the producers of Jersey Shore don’t just ask their buddies, “Hey, can you take a look at this and let me know if it’s any good?” and then use their feedback as basis for the final cut.  They have a slew of experienced professionals with a track record of success that help them with this process.

So, the next time you finish that rough draft of your essay, know that your work is far from done.  If you want it to be the best it can be and achieve the results you expect, make sure you get some awesome advice and feedback from a teacher, professor, writing center, or essay editing service.  Once done, edit your writing and revise with confidence.  Fist pump FTW!

It’s often easy to get in a groove and crank through an essay.  The trouble often comes at the very end; many students dread the conclusion.  While it’s important to end your essay with a summary of your main point, or argument, it’s also vital to end on a high note.  Jersey Shore tends to do both a magnificent and terrible job of this.

Each episode of Jersey Shore inevitably leaves the audience wanting more.  Whether it’s alluding to what will happen next week, or cutting the scene at a climatic point, they really know how to hook the viewer, transitioning them into the next episode or segment.  Not only are you left wanting to watch it, but you can’t wait to see what happens next!

Each paragraph of your essay should strive to do the same.  You want to maintain your readers’ focus and hook each paragraph together.  However, nailing your final conclusion and ending your essay at the appropriate time, without trailing off into an endless rambling, is also extremely important.  Knowing when to wrap up your argument and end with a killer conclusion can be both an art and a science.

Need a real world example?  Let’s take a look at the viewership numbers of all the Jersey Shore episodes: 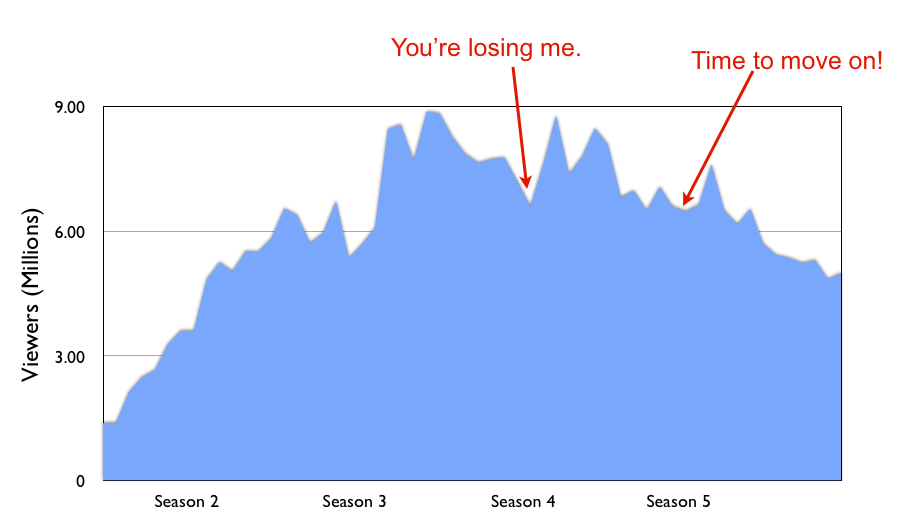 As we can see from this graph, Jersey Shore’s viewership numbers dropped pretty heavily at the end of season 3, however, the same thing happened at the end of season 2.  So, at this point it’s easy to believe they’d have the same increase in viewership growth with the start of season 4 (just as it did with season 3).  And it sure looked as though that would hold true.  Season 4 started with a bang!  But something different happened this time… it fizzled out just shy of season 3’s peak in viewership and then quickly settled back down to the same lower levels we saw at the end of that season.

This should have been a red flag to the Jersey Shore production crew.  Clearly, interest was waning, and this was evident well before season 4 was completely wrapped up.  Throughout season 5, we can see the deteriorating viewership trend continue to finish with lows that hadn’t been seen since season 2!

So what should they have done?  Simply put, Jersey Shore should have realized this declining demand about three quarters through season 4 and started focusing on their most popular characters’ spin offs.  At that point, viewers would still be quite engaged and they might be able to leverage that interest with fresh content.  Instead, it appears they are coming back for yet a sixth season.  I wonder what that graph will like like next year… do you really think the world wants to see a pregnant Snooki living vicariously through her roommates?

Take a queue from Jersey Shore’s huge mistake when writing your next essay.  If you feel like you’re rambling and losing your audience’s attention, you probably are.  Wrap things up, make your point, end with a killer conclusion, and focus on making your next essay even better!