Passive Voice: How To Avoid this Writing Pitfall

Relying on passive voice can be the pitfall of any well-meaning writer. This unwieldy construction of lifeless verbs and passive subjects is a sure way to take the power right out of your words.

Horror author Stephen King described passive voice as being weak, circuitous, and frequently tortuous.  It’s true that if you inadvertently and excessively write in the passive voice, your writing will become a tangle of sticky sentences sure to suffocate your reader.

One witty English teacher pointed out that famous movie quotes would be ruined in passive voice. It’s true—what if Rhett Butler had said, “Frankly, my dear, a damn is not given by me”? Would anyone give a damn about Gone with the Wind? 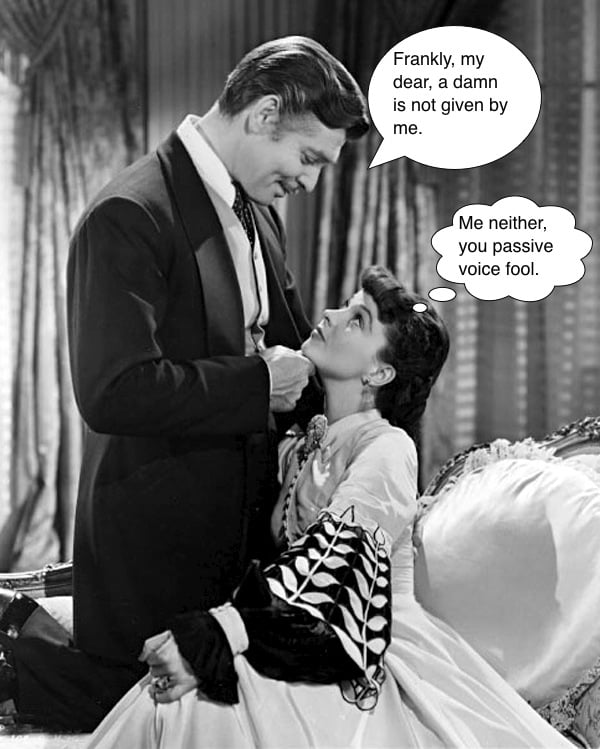 This post will teach how to recognize passive voice, when it’s okay to use (yes, it is sometimes!), and how to transform passive into active voice.

What Is Passive Voice?

To really understand passive voice, first it’s important to understand the difference between a subject and an object in a sentence. (For all you grammar lovers out there, I’m intentionally not getting into indirect and direct objects in this post, but for anyone who is interested, here is a good post on the difference.)

Let’s take this sentence as an example: “The pitcher threw the ball.”

The passive voice reverses the roles of subject and object and makes it so that instead of the subject doing something, it now has something done to it. The subject becomes passive to the action in the sentence.

Let’s rewrite our sentence from above in the passive voice: “the ball was thrown by the pitcher.” As you can see, the results of the passive voice are usually clunky, apologetic, and difficult-to-follow sentences.

There are some instances when it’s safe or even preferable to write in passive voice. I’ll address those later. But first, let’s discuss how to recognize when your sentence is passive or active.

How to Recognize Passive Voice

I’m going to give you four main clues that will help you determine whether a sentence construction is passive or active.

For example, “The dog was adopted.”

This passive sentence relies on “was,” the past-tense form of the verb “to be.”

Take the example, “Sophie was hungry.” Even though the word “was” is present here, the sentence still uses active voice. Sophie is the subject, and she is hungry.

One fun way to tell the difference between these two examples is to apply the zombie test. This awesome test, created by a professor at USMC, advises you to put the phrase “by zombies” at the end of a sentence to determine whether it’s passive or active.

Let’s apply the zombie test to our example sentence: “The dog was adopted by zombies” works! I just hope the zombies don’t eat dog brains.

On the other hand, “Sophie was hungry by zombies” makes no sense, so we know this sentence is already in active voice.

The passive voice often includes the preposition “by,” followed by the subject of the sentence. For example:

This classically passive construction is pretty easy to recognize. However, don’t make the mistake of assuming that “by” automatically means passive voice. Since “by” is a preposition, writers use it in myriad ways. For example, the sentence “I’m going to stop by the grocery store” is not a passive construction.

The passive voice puts the object first in the sentence and the subject second. This is akin to putting the proverbial “cart before the horse.” As in this example,

“The cart (object first) was pulled by the horse (subject second).”

If I write the above sentence in active voice, the subject comes first. As in this example,

Whenever you find your subject lingering at the end of a sentence, you have a strong clue that your sentence is in passive voice.

Sometimes the passive voice completely leaves the subject out of the sentence. For example:

In all of these sentences, there is no subject. Now there could be a perfectly good reason for leaving the subject out, but we’ll get to that later.

How to Change Passive Voice to Active Voice

Now that you know how to recognize passive voice, let’s talk about how to change passive to active voice.

In the following visual examples, I will highlight the subject in purple, the object in green, and the verb in bold italics. These are the main components of the basic passive sentence.

Watch how I change the sentences from passive to active voice in three simple steps. 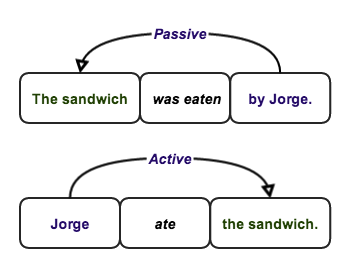 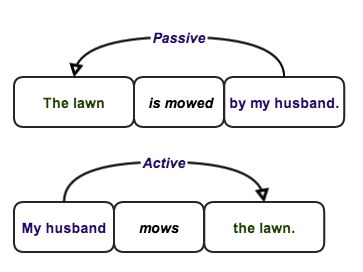 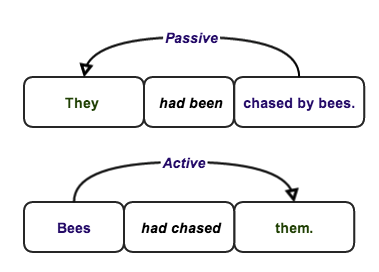 But wait—let me give you one more example of a passive construction that has no subject at all. 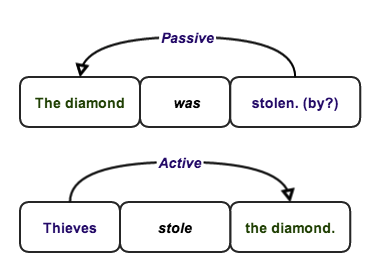 The only difference in this example is that we did not originally know who our subject was. By defining the subject first, we are able to transform this into active voice.

When Is it Okay to Use Passive Voice?

Despite what your English teacher might have told you, sometimes it’s preferable to write in passive voice. Typically, passive voice is used for these three reasons:

1. To emphasize the object of the sentence.

2. To hide or deemphasize the subject of a sentence.

Politicians frequently use this method to avoid taking direct responsibility for a situation. The President might passively state something like “bombs were dropped,” instead of actively stating “the US dropped bombs.” 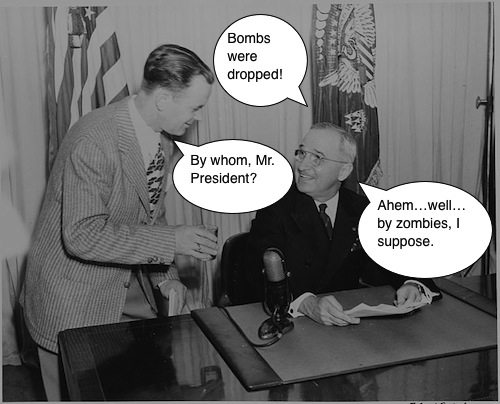 Scientists use this method too, but in their case they use passive voice to avoid subjectivity in their work. For example, rather than actively writing, “we discovered that penicillin cures bacterial infections,” scientists will take themselves out of the picture and passively write, “It was discovered that bacterial infections can be cured by penicillin.”This type of writing lends a level of credibility to research that must remain objective.

That said, it is possible to remain objective while simultaneously writing in the active voice. The trick is to avoid personal pronouns like “I” and “we.” From our example above of “we discovered that penicillin cures bacterial infections,” we can change it to an objective, active statement by writing “researchers discovered that penicillin cures bacterial infections.”

3. The subject is unknown.

Police detectives and journalists often use passive voice in documents when the subject is unknown. For example, a detective might write in his report, “the merchandise was stolen.” The police don’t know who stole the merchandise, so the only way to write about it is to leave the subject out of the sentence. They might also use the passive voice when they don’t want to disclose the subject of the sentence, as in, “A crime was committed last night.”

To learn more about when it’s okay to use passive voice, I recommend reading The Pleasures and Perils of the Passive.

Awesome! You’ve made it this far, now let’s see if you can put your newfound knowledge into action. I’ve created a simple quiz for you to test your passive voice savvy. Try it out now.

One cool application I found that helps me find the passive voice in my writing is this passive territory tool. It works to highlight uses of the verb “to be” in all of its forms, as well as any uses of the preposition “by.” Now you know these words are two important clues to help you pinpoint passive voice. But remember, if you do use this tool, not all instances of those words necessarily mean passive voice (as I mentioned above). Use your best judgment, and if you need more help, Kibin editors are available 24/7.