Don’t Make These 6 Tragic Mistakes in Your Macbeth Essay

You’ve been reading Macbeth very closely and have gotten pulled into the drama of it all. And let’s face it—the fact that it’s Shakespeare’s shortest tragic play certainly doesn’t hurt.

But just because it’s shorter than the rest doesn’t mean it’s not packed with betrayal, murder, symbolism, foreshadowing, and a lot of other goodies to analyze.

The key is actually writing a great Macbeth essay.

That means there are a few things you want to avoid. After all, just because Macbeth is a tragedy doesn’t mean your analysis has to be. I’ll be here to help make sure you avoid six tragic mistakes and show you what to do instead.

This first mistake, unfortunately, happens way too often. You might be itching to get right into the writing or just wanting to get it all over with, but slow it down a little. Macbeth is full of different ideas and literary devices that you’ll want to use in your essay.

But without an outline to guide you, your transitions won’t make sense. Your ideas won’t be as clear. Honestly, the whole thing often ends up looking the way Macbeth did in the end—just a huge mess.

Instead, take 5 or 10 minutes to plan out what you want to say.

Even though it may seem like this extra step is taking up valuable writing time, you can actually significantly decrease the time it takes to write your Macbeth essay. Why? You won’t have to think so much about what should come next, where to make a certain point, or whether you’re forgetting something.

Below is an example of an outline focusing on symbolism in Macbeth. Don’t worry if yours doesn’t look exactly like mine. Your outline can be extremely detailed or more sparse. As long as you get the main points of your essay down in order, you’ll be fine.

*Outline is for illustrative purposes. Make sure your own outline has at least two points at each level. If there’s a 1 or an A, there must be a 2 or a B, respectively.

Okay, so forgetting and forgetting about your thesis statement are two different kinds of mistakes, but both are pretty bad mistakes to make.

Forgetting your thesis statement means not including it at all.

Your thesis statement should be written as part of your introduction. It should let the reader know what your essay is going to be about. Forgetting to include this sentence or two is pretty much a disaster. Your reader won’t have a good idea about what you’re trying to accomplish with your essay.

Forgetting about your thesis statement means including it in your introduction, but not really following it throughout your essay.

Remember that outline we talked about a minute ago? Well, the outline is your roadmap to writing your Macbeth essay. But your thesis statement is your reader’s roadmap to reading your essay.

It should include a brief mention of the main idea of each body paragraph. Those body paragraphs, in return, should refer back to the thesis statement.

Shakespeare uses the symbolism of blood, prophecy, and hallucinations to explore themes of violence and guilt in Macbeth.

Mistake #3: Taking on too much

Unless you have a prompt for your Macbeth essay, it might be hard choosing what to write about. Analysis is such a broad term that it might be tempting to try to write about everything. Don’t get fooled into thinking you should do that.

There are different forms of symbolism, as I’ve already discussed in my outline, as well as themes, such as the danger of unchecked ambition and the link between violence and masculinity.

There’s also different characters to analyze (Macbeth and Lady Macbeth could both be essays all on their own). But you can choose just one or two of these elements.

In fact, you should choose just one or two of these elements.

Writing about too much will make your Macbeth essay harder to organize. And while you might think you’re being thorough, with so many plot points, characters, and literary devices to analyze, you won’t be able to get into enough detail on any one of them.

Instead, choose one literary device, one theme, one or two characters, or whatever other specific element you can write a whole essay about. Then write it.

Do your research and give the supporting details any great essay should have.

Once you narrow down what you want to write about in your Macbeth essay, you have to analyze the information in the play. Summaries simply won’t do.

Summarizing a piece of literature is just telling it like it is. It’s saying, “Macbeth killed Duncan,” without any sort of context as to what led to that action or why it’s important.

If your readers wanted a summary of Macbeth, they could find one online.

Mistake #4: Summarizing instead of analyzing. Avoid it by digging deeper in your Macbeth essay.

Analyzing literature makes you dig a little deeper into the significance of a certain plot point, character, or literary device. It requires a little more brain power and effort, but in the end, your reader might learn something she hadn’t thought about before. You might even look at Macbeth in a new light.

Mistake #5: Writing in the first person

Writing in the first person (using “I” in your essay) in academic writing is almost always frowned upon. Unless you’re writing a narrative essay in which you’re talking about something that happened to you, you never want to reference yourself.

Instead, use third person (“he/she/it”) to reference any characters or the author.

While your Macbeth essay should clearly state your analysis of the play, your thesis is supported by evidence in the literature. Therefore, you aren’t stating your opinion. Rather, you’re stating facts. Writing in the first person takes away legitimacy from the statements you make.

For example, you could write this:

It’s obviously what you think because you’re the one writing the essay. The important thing is that you can prove it with evidence from the text.

That statement would be much better if you just stated it as fact, without “I think” at the front:

Mistake #6: Not taking the time to proofread/edit 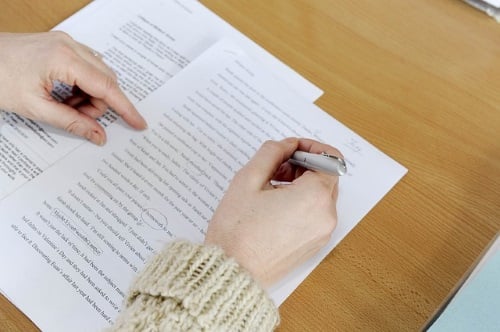 The proofreading and editing process isn’t just for catching typos. Skipping this step can be pretty disastrous for some people.

Of course, misspelling and missed punctuation marks happen, and most teachers don’t look very closely at a couple missing commas.

However, editing is also about looking at the flow of the paper. Did it cover everything you wanted it to? Was it easy to read, but not too simple? How did the transitions work within the text?

These are all elements you should be paying attention to and fixing if possible. We know that sometimes people are too involved with their work to take a big enough step back to objectively look at their own writing. That’s where the Kibin editors come in.

Send your paper to one of them, so you can know for sure that your Macbeth essay will skip tragic and go straight to terrific.