How to Create a Superb Synthesis Essay Outline

That’s awesome! But I’m going to ask you for a favor: pump your brakes for a second, so you can ask yourself this question:

Have I ever written a synthesis essay before?

If the answer is no, then you’ll want to check out How to Write a Surprisingly Good Synthesis Essay so that you know what you’re getting yourself into. 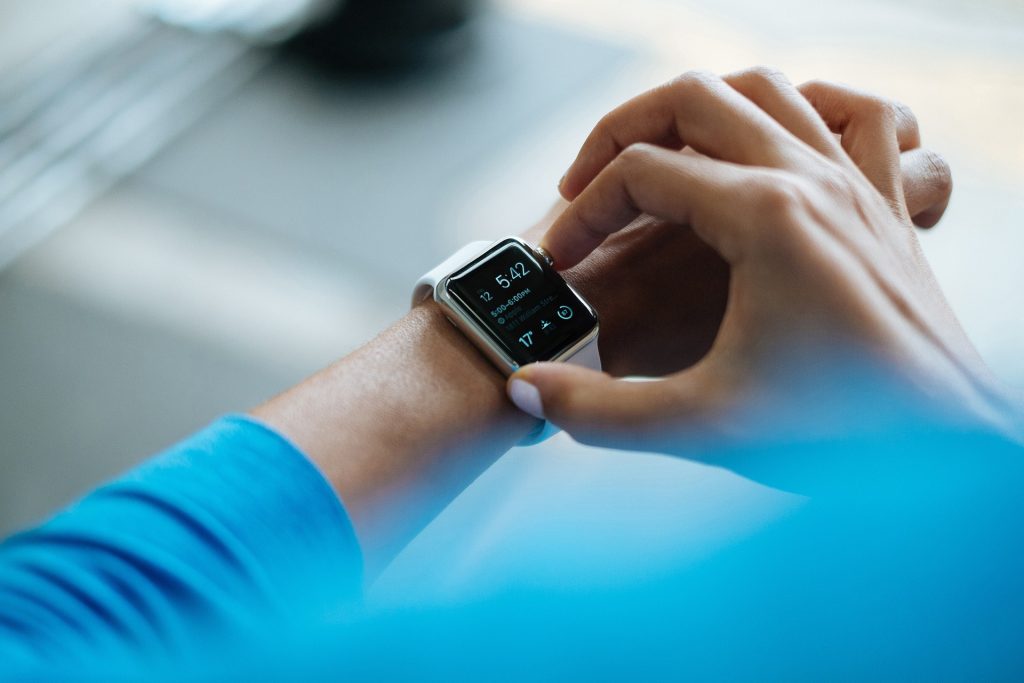 Toe in the Water

Okay—now that you know what’s what, let’s get down to business.

By now, your teacher should have given you a synthesis essay topic and the sources. Sometimes you’re given a specific prompt or stance on a topic; sometimes your teacher will expect you to come up with your own stance to argue in the essay.

Whatever the case, the outline process will be the same. There are just a couple of steps you should take before you start on the outline that will ensure your success on this paper.

Make sure you read through all of the sources and take notes on common themes or arguments being made. This will help you draw connections between the sources and give you material to quote when it’s time to defend your stance.

Going into an essay blind is like getting lost in the wilderness. Going into an outline without brainstorming is like having a poorly drawn map and forgetting your compass.

Brainstorming is a solid exercise that helps you figure out which direction your writing needs to take to reach a successful outcome. It also lowers the risk that you’ll get stuck mid-paper and want to start over.

Here are some other great prewriting strategies that can be super helpful to you before you dive into your essay.

The Layout of a Synthesis Essay Outline 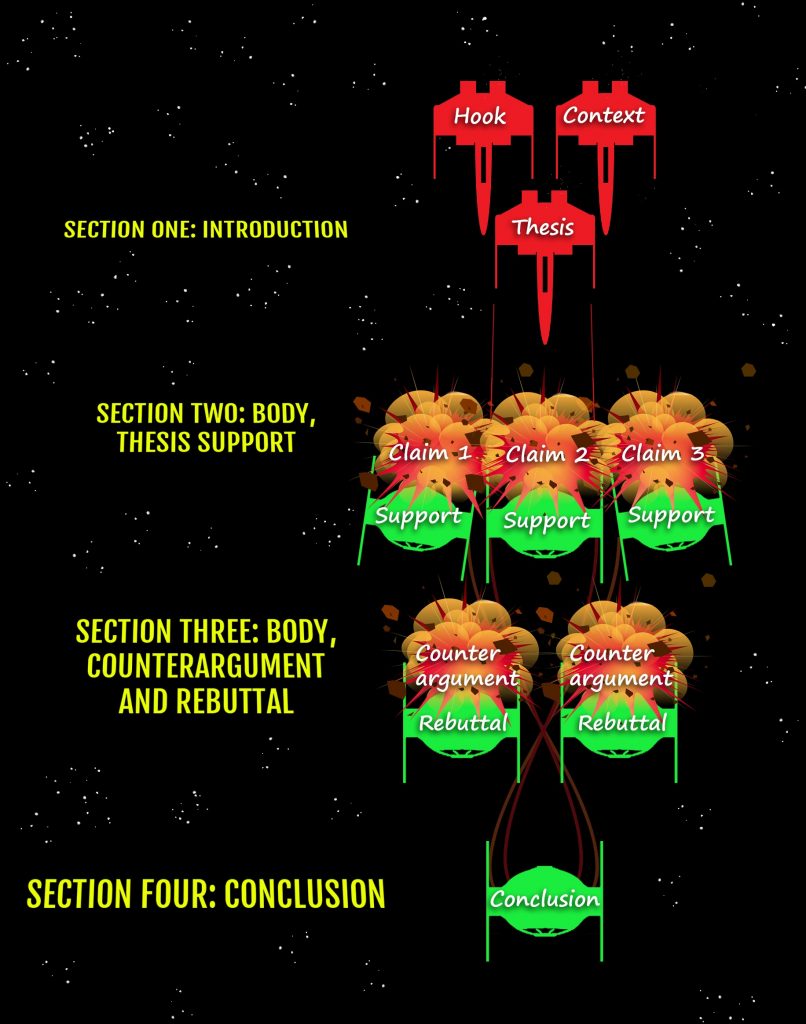 The above is the basic layout of your synthesis essay outline. It should look pretty familiar if you’ve written an argument essay. If not, don’t worry—we’re going to break it down, piece by piece.

The best thing we can do is practice with a low-stakes assignment that will help you get started on your own outline.

The Topic at Hand

If you can’t tell where this is going, know that I’m a huge nerd (as if the above image wasn’t a dead giveaway), and we’re about to tackle a very controversial topic:

For the sake of this exercise (and because I like a challenge), we’ll be arguing the position that, yes, the Star Wars prequels are indeed cinematic achievements. We will also pretend we have been given several sources that help us make this argument:

“Pew Pew: The Not-So-Quiet Triumph of the Star Wars Prequels,” a 2016 article by J.J. Binks published in ARTOO Magazine.

“Studies in Sci-Fi Cinema,” a 2015 essay by Bob A. Fett published in Lando: A Journal of Swagger.

“Good Enough for Roger Ebert,” a 2018 blog post by Mo N. Mothma published on Some Like It Hoth.

Synthesis essays require that you argue a stance using your sources as evidence, so there’s a good chance you’ll also be required to find sound counterarguments within your sources. And then your goal will be to refute them … but we’ll get to that in a moment.

Also keep in mind that not all topics will be so cut-and-dry like this. Often, teachers will give you sources that are more complicated, and it’s up to you to find the arguments within, both those that agree and disagree with your position. 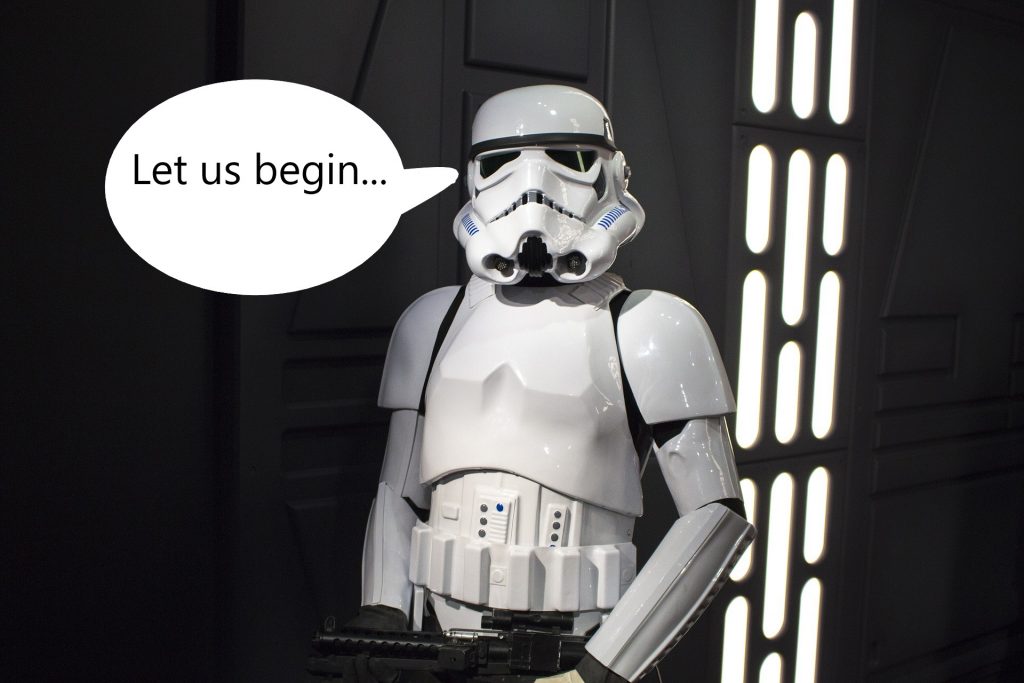 Let’s take a look at how we can craft a synthesis essay outline using the above sources, step by step. 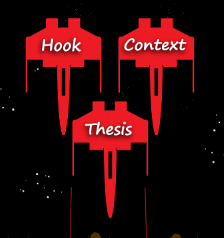 The essay introduction is where you first draw your reader in with a strong hook sentence.

Next, you provide context (background information) on the history and importance of the issue.

You should finish this paragraph with your thesis.

The intro starts with your hook—a sentence that grabs the reader’s attention. Here’s what you might write as a hook for our Star Wars stance:

If fans fail to love the Star Wars prequels, then they are simply not true Star Wars fans.

You’ll be discussing the issue at length in your body paragraphs, but your reader needs an introduction to the key elements of the issue. This is a good spot to briefly answer the following questions:

The thesis is the main claim/argument that you’re making in the essay. It’s the official stance that you will support throughout the rest of the paper. It should be one to two sentences and should make a specific claim that introduces the topics of the other supporting claims you’ll write in the body paragraphs.

Despite the ongoing arguments over this trilogy, on the merits of cinematography, artistry, imagination, technological feats, and canonization, the Star Wars prequels are nevertheless great films.

Body: Defense of your thesis 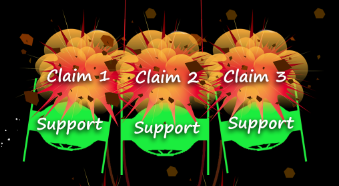 Depending on the required length of your paper, this section should be about three to six paragraphs long.

That’s one to two paragraphs per claim.

A claim is a statement you make that supports your thesis. This is a great place to apply logos and pathos to your synthesis. Here’s an example of a claim for our paper:

Between practical set design and digital effects, The Phantom Menace is visually groundbreaking for a film made in 1999 when CGI was still in its infancy.

You should have at least three supporting claims in your synthesis essay outline. Devote one to two paragraphs to each claim in your essay.

A claim is nothing without support, and there are two things you need to do here in order to successfully support your claims.

1. Use evidence from your sources

This is how you’ll support your claim while also showing your teacher how well you can draw connections between the sources and your stance on the issue.

Make use of direct quotes, paraphrasing, and summary, but make sure most of the paper is in your own words!

You should use your sources only to support what you’ve already said—your teacher wants to see what you have to say about the subject, not others.

Here’s an example of paraphrased evidence-based support for the above claim.

The special effects were extremely complex for the time—as much a marvel then as when the effects of the original trilogy were a cinematic marvel to behold (Binks, 2016).

Stuck on Your Essay?
Check out these example synthesis essays.
Yes! Show me examples.

2. Back up the significance of your evidence with logic

This approach to special effects requires a significant amount of hard work and artistic vision that cannot be duplicated to the same degree that George Lucas applies to this film. Each Star Wars film takes place in a galaxy far, far away, and with new technology and a larger budget available, Lucas is able to deliver this completely alien universe’s aesthetic the way it was always meant to be seen. This alone is a special achievement for any filmmakers who try to revisit their work and finish a story they longed to tell. 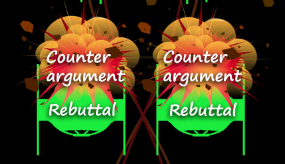 A good argument is never one-sided, so as you’re working to synthesize your sources, showing your teacher that you’ve considered one or two other stances is especially important.

That said, you still need to demonstrate why the opposing viewpoint, while valid, is not as strong as yours. This is called the rebuttal or refutation.

The question remains, are the Star Wars prequels perfect? The answer is no. “As films, they have many flaws, some forgivable, some less so” (Fett, 2015). No film is perfect, but each film should set out to accomplish certain goals. In this regard, the prequels excel at providing an entertaining science-fiction adventure experience that appeals to a wide audience.

The conclusion is where you wrap up your synthesis essay by doing two things.

First, restate the importance of your issue, guiding your reader back to your thesis.

Then, tell the reader what would happen if your argument is (or is not) accepted.

This section is a perfect opportunity to make your last stand and emphasize the importance of your issue and viewpoint.

What happens if the reader chooses to ignore your sound evidence? How do you put up a final defense against this? Check it out:

While film critics and audience members are entitled to their opinions about the films they watch and enjoy, the success of the Star Wars prequels cannot be ignored. These films succeeded at the box office and paved the way for new Star Wars stories to be told. They allowed audiences to revisit their favorite sci-fi universe and see it for the first time in the grand spectacle that Lucas had always wanted to portray. Without these films, Star Wars may have only existed as a classic trilogy, cherished and admired but ultimately lost to time. The success of the prequels ensures Star Wars’ continued and everlasting presence in cinema. 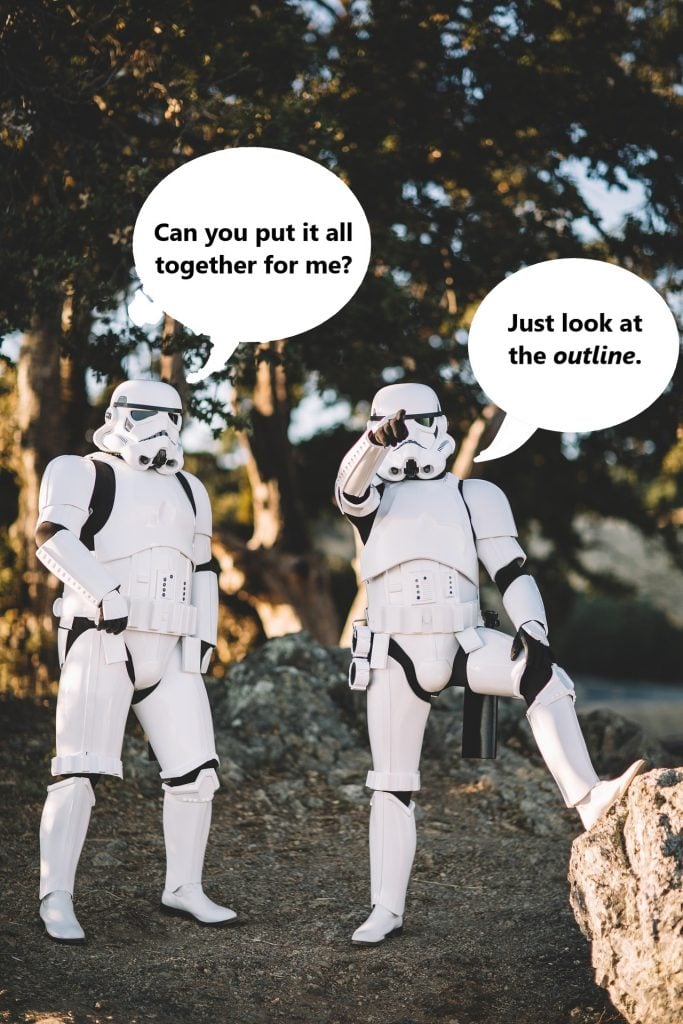 Below is how the outline for this topic would look when put together. Keep in mind that this is a guide—you’ll have to input your notes for each of these sections and build your paper from this framework.

And that’s it in a nutshell!

I’ve even created a skeleton Synthesis Outline Template you can download to get started.

Kibin editors can also help you edit your outline or your finished essay, so don’t hesitate to send us your work!