Malapropisms: Are You Making These Funny Mistakes?

If you saw your name associated with the terms above, you’d be forgiven if your first thought is to immediately visit your favorite health website and see what type of dreadful disease you may have.

Fear not—the term malapropism has nothing to do with a rare disease. It simply means that you’ve used the incorrect word in place of a word that sounds similar (like saying “pacifically” instead of “specifically”).

So breathe easy knowing that you’re only suffering from incorrect word choices, and take a look at the examples below to make sure you’re not making one (or more) of these funny wording mistakes.

What Is a Malapropism?

A malapropism is the incorrect use of a word in which you mistakenly replace the correct word with a word that sounds similar.

We’ve all had those embarrassing moments when we say one thing but mean to say something else.

Sometimes these errors are Freudian slips, and you say an incorrect word (which may or may not be closely associated with the word you meant to say). While some people say Freudian slips are simply slips of the tongue (with no deeper meaning), others believe that they actually reveal something deeper about you or your personality.

Unless, of course, your boyfriend is your boss, some may say that this Freudian slip means that you have hidden romantic feelings for your boss. 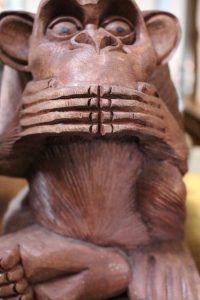 While malapropisms can be slips of the tongue, they’re different from Freudian slips because the word you say actually sounds much like the word you’re supposed to be using. (In some cases, you may even use the wrong word but think you’re using it correctly.)

In this case, the correct word should be monogamy (not monotony).

The resulting malapropism can lead to an unintended humorous outcome. In the example above, the joke is that two people who have been together for a very long time as a couple may, in fact, say they have a lot of monotony in their lives.

Malapropisms are also used intentionally to add humor or satire.

In fact, malapropisms as a term first emerged in 1775 thanks to the character Mrs. Malaprop in Richard Brinsley Sheridan’s play The Rivals. The play is a comedy of manners (meaning it satirizes the behaviors of those in a certain social group, usually the upper class).

In more modern times, the character Archie Bunker, from the 1970s sitcom All in the Family, was the master of malapropisms. (While the character of Archie Bunker was guilty of mixing up a great many words, the writers knew exactly what they were doing when they wrote these humorous lines.)

Interested in more examples? Take a look at these eight malapropisms (and make sure you’re not making these funny mistakes).

If you’re guilty of using malapropisms, don’t fret. You’re in good company. Plenty of famous folks have used them too.

“Jive” instead of “jibe”

Jive is a form of music or a form of slang associated with jive music.

Jibe means to be in accord or to agree. 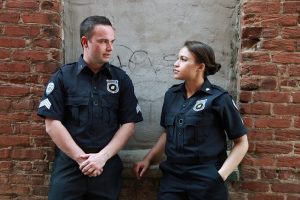 “Statue” instead of “statute”

A statue is a life-size (or larger) figure, such as a person or animal, created from a material such as stone, bronze, or marble.

A statute is a law created by a government or other institution.

“Intern” instead of “in turn”

An intern is someone who works for a company to gain experience. Interns are often students and generally work without pay.

In turn means in succession or one after the other.

“Intern” and “in turn” sound virtually the same in speech, so if you misuse the word in a conversation, no one will likely notice. On paper, though, the difference is clear, and you’ll most certainly be busted for using this malapropism.

While it’s true that a stone that is literally rolling wouldn’t be a place for moths to rest, the correct word in the idiom is “moss,” not “moths.”

The idiom refers to the idea that people in constant motion don’t have time to become stagnant.

It can also mean that people who do not settle down (and thus move from one place to the next) don’t need to worry about responsibility or obligations. The original meaning of the proverb also referred to the idea that such people can’t be trusted.

“Oranges” instead of “origins”

“Electrical” instead of “electoral”

Electrical, of course, has to do with electricity.

Electoral relates to elections (as in the electoral college).

“Mass production” instead of “mass destruction”

“Unanimous” instead of “anonymous”

Unanimous means that everyone is in agreement.

Anonymous means that a person isn’t known by name. 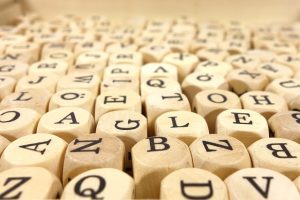 Interested in reading more examples of malapropisms? You can check out some medical malapropisms here and here.

You can also check out this list of more common malapropisms.

If all this talk about malapropisms, including the funny mistakes they might create, has you nervous about each and every word you put into your paper, here are a few additional resources to help you select the perfect word.

Not sure you’ve mastered perfect word choice? Worried that you’re guilty of a malapropism? Get help from a Kibin editor. We’ve edited tens of thousands of documents and can help you with your writing too.